Armagh made home comforts count as they marched into a second successive Ulster Senior Championship final with this comprehensive victory over Monaghan at the Athletic Grounds on Sunday night.

Outscoring Monaghan by 2-8 to one paltry point in the first quarter laid the perfect foundation for Armagh going on to secure a place in the Clones showpiece at the end of this month with relative ease.

They will meet either holders Donegal, who were pushed hard by All Ireland Intermediate champions Tyrone in Saturday’s quarter-final at Breffni Park, or former Armagh manager James Daly’s Cavan, in the decider. 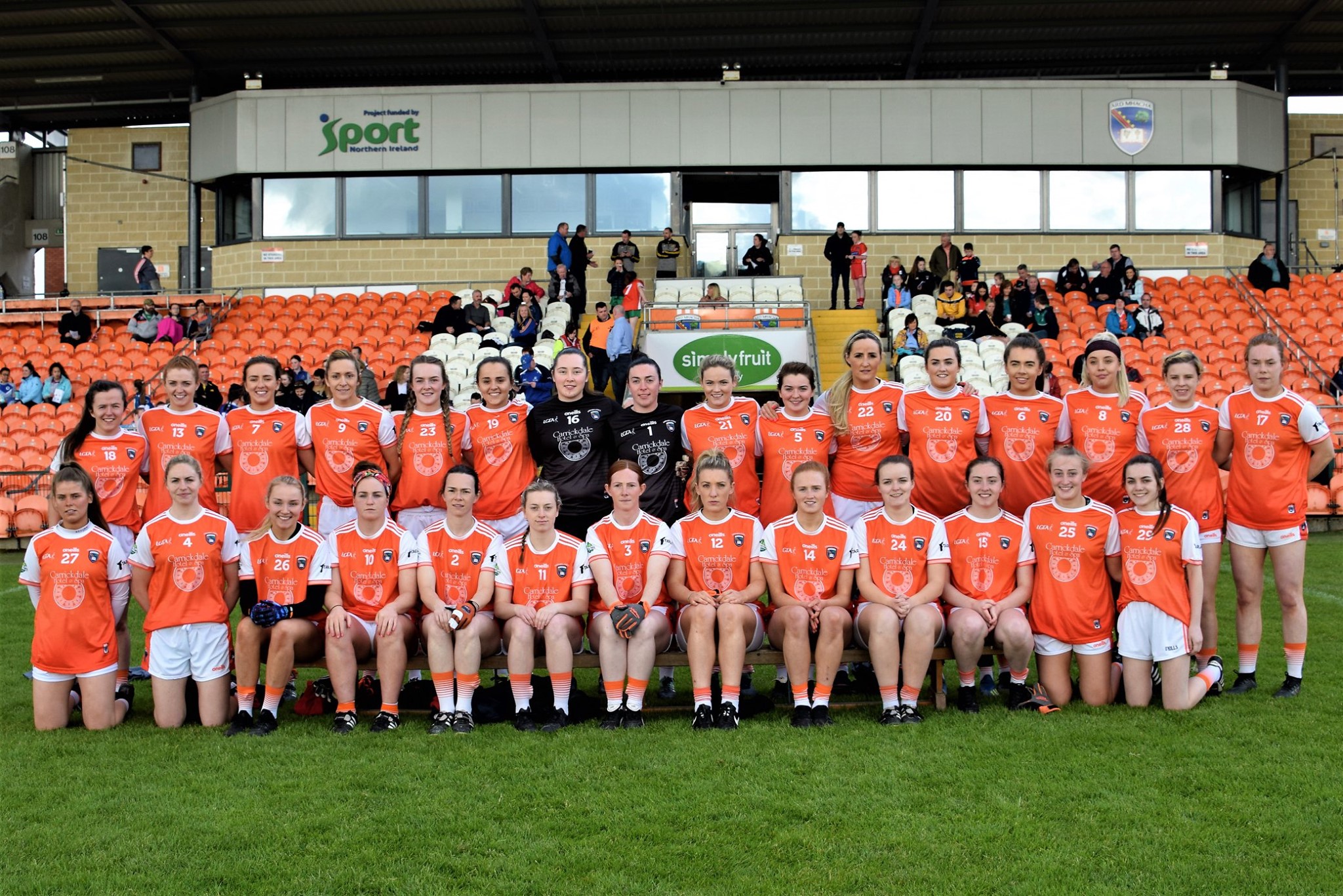 The game may have ended in a torrential downpour which intensified during nearly seven minutes of injury-time but by then Armagh were metaphorically home and dry.

The Orchard crew were arguably guilty of taking their foot off the pedal a bit during the second quarter when they became casual at times after that dream start, but they still won with plenty to spare and it was a pleasing performance overall.
Monaghan got the first and last scores of the second half but, in between, Armagh rattled up another 3-5 to 0-4 by their opponents to romp home by the commanding margin of 14 points.

There were shades of Armagh’s most recent Championship match at the Athletic Grounds when they trounced Tyrone by 15 points in the 2014 quarter-final on the way to their last Ulster title triumph.

That unforgettable final five years ago produced a double-digit victory for the Orchard team against the then champions Monaghan but Armagh haven’t beaten their neighbours since in the provincial competition.

Monaghan gained revenge with a convincing victory in the 2015 semi-final at Breffni Park and destroyed an abject Armagh in the corresponding game at Killyclogher 12 months later.

The spoils were shared when these teams met in an All Ireland group game at Clones last July but Monaghan had won on their most recent visit to the Athletic Grounds, an NFL Division One relegation play-off in 2017.

That result has led to Armagh playing a National League level below Monaghan these past two seasons, though the Farney women were relegated from the top flight this spring.

Badly missing several stalwarts who were no longer available, Monaghan lost their first six league games so their fate was sealed before drawing a dead rubber final fixture against Mayo.

So Monaghan came to the Athletic Grounds still seeking a first victory of 2019 in contrast to Armagh having spent the spring winning regularly, albeit in the second division.

The Orchard crew comfortably topped the Division Two table courtesy of six wins and only one defeat, ironically at the Athletic Grounds, against Kerry when they began badly and also leaked two late goals.

Armagh missed out on promotion after being hit by a perfect storm with multiple All Stars Caroline O’Hanlon and Aimee Mackin, along with the latter’s younger sibling Blaithin, all missing the semi-final showdown with the Kingdom girls.

However they came into this Ulster semi with a compelling mix of frustration from failing to get promoted and confidence from their impressive performances in that first phase of the season.

Monaghan have an incredible record in the provincial championship, reaching 17 of the first 18 finals this century before losing last season’s semi against Donegal.

In spite of that impeccable pedigree, most pundits made Armagh favourites to clinch only the sixth Ulster final appearance in Orchard history and they duly delivered in emphatic fashion.

Much has been made of Monaghan being a team in transition given the absence this season of familiar faces such as goalkeeper Linda Martin, Sharon Courtney, Granine McNally and Ellen McCarron.

In reality though, the Orchard has had significant turnover too with a host of previous regulars absent, including five departed players who each started at least 11 of the 13 Armagh matches last season.

All Star Mairead Tennyson, fellow stalwart Sharon Reel and another experienced campaigner Marian McGuinness have all effectively retired from inter-county football while Lauren McConville is in Australia for a year and Fionnuala McKenna has taken this season off from Orchard duty.

Additionally double All Star Aimee Mackin wasn’t fit to start this Ulster semi and captain Caoimhe Morgan, although named in the official line-up nine months after cruciate repair surgery, just made her first appearance of the season off the bench.
Dromintee’s Shauna Grey started seven of Armagh’s eight NFL fixtures but has subsequently left the panel to spend the summer in America while Forkhill defender Megan Sheridan was in the team for the first six Armagh matches of 2019 before breaking her hand.

There was also the unexplained absence of another frontliner, Niamh Marley, who was surprisingly left out of the team and pointedly not brought on as one of five subs used on the evening in spite of not being injured.

So Monaghan aren’t the only team in transition and Armagh were wary of being branded favourites given the painfully fresh memories of the 2016 semi-final in Killyclogher.

The orangewomen were tipped to win on that occasion given Monaghan’s struggles in that spring’s National League but on the night they hammered Armagh by 16 points.

This time though Armagh got off to the perfect start with that opening goal after just 18 seconds, set up by Blaithin Mackin after a sublime long ball by O’Hanlon from a free awarded at the throw-in and well taken by McCoy racing through.
Mallon confidently landed two frees from out on the left and Blaithin Mackin kicked a long-range point to put Armagh six ahead in the first five minutes.

It could have been even better but Ballyhegan’s Lavery, drafted in for Morgan in a reshuffled side, was wasteful in possession several times early on as she settled into the game.

Rosemary Courtney opened Monaghan’s account with a free but Mallon and O’Hanlon both kicked frees in quick succession and McCoy pointed too.

The imposing Mallon drove over two monster points from play in the space of a minute and when young Reel finished to the net from a very acute angle on the right after Mackin had pounced on a weak kick-out and hit the bar, the goal gave Armagh a 13-point lead late in the first quarter.

From there, Armagh were outscored 1-5 to just a single point in the remainder of the half as a determined Monaghan fightback began and the team in orange understandably lost some of their intensity.

Clodagh McCambridge plucked a Monaghan free from under her own crossbar but good scores soon followed from Casey Treanor and Chloe McBride.

Monaghan captain Cora Courtney was awarded a penalty by Cavan referee Yvonne Duffy on 22 minutes and, although goalkeeper Caroline O’Hare did well to save her initial effort, the triple All Star tucked the rebound away.

Silverbridge teenager Reel pointed just after kicking a high wide and Lavery was also off target before Monaghan reeled off three points in injury-time.

Cora Courtney chipped one over, her sister Rosemary landed a free and the half finished with a stinging shot by Shauna Coyle being tipped over the bar by O’Hare.

Monaghan goalkeeper Bridin Tierney made a great save from O’Hanlon at the start of the second half and at the other end Cora Courtney kicked a bad wide after a good run.

Coyle eventually got the first score nearly nine minutes in, pointing after good approach play, and Armagh were grateful for two timely interventions in defence by the hard-working O’Hanlon either side of a wild wide from McCoy.

Armagh gave themselves some breathing space with a third goal, Lavery getting the final touch after Mallon’s shot had been blocked by the keeper following a return pass from McCoy and Blaithin Mackin rolled the ball back soccer-style towards the far corner from an acute angle on the left.

Lavery added a fine point within a minute but that was her last action before being replaced by Aimee Mackin, whose introduction was surprising particularly considering Armagh were comfortably ahead and she didn’t need to be risked.
Rosemary Courtney kicked another free before the feel-good moment of the evening when Morgan made her first Armagh appearance for 11 months, replacing Rebecca O’Reilly at the back.

McCoy soon scored her second goal, latching onto an awful kickout, and, although both Mackins kicked wides, Niamh Reel cancelled out a Rosemary Courtney point with a good one of her own before giving way to Mullaghbawn captain Niamh Murphy up front.

A Blaithin Mackin point put Armagh 12 ahead, prompting the precautionary withdrawl of Mallon, with Crossmaglen’s Mairead Watters sent on instead of fit-again Lissummon forward Catherine Marley.

Aimee Mackin got herself on the scoreboard, lashing over a shot after a good ball by O’Hanlon, and young Clann Eireann defender Cait Towe made her first Armagh appearance in place of Colleen McKenna.

When Armagh replied to another Rosemary Courtney free with a fifth goal, by Blaithin Mackin, the orangewomen were 15 points clear going into that unappealingly prolonged period of injury-time.

With the earlier lightning gone it was now extremely murky under the threatening sky and, after the torrential rain arrived, the game got messy and Armagh’s Tiarna Grimes and Monaghan’s Eva Woods were sinbinned in separate incidents, the later when McCoy was caught hard.

Triple All Stars Cora Courtney and O’Hanlon exchanged points and, although Coyle got the last score of the evening, it was scant consolation for Monaghan with the outcome of this contest long since settled.

There were solid displays across the board by the likes of Maebh Moriarty, her Clann Eireann clubmate Niamh Coleman and Crossmaglen captain Aveen Donaldson, who was finally making her Championship debut after many years on the fringes.
But a special mention must go to corner back Sarah Marley, harshly scapegoated after being given a torrid time by Ciara McAnespie in the corresponding game three years ago, for shackling the All Star forward so well this time.