There was double delight for Camlough’s gifted sporting sisters on either side of the world at opposite ends of Saturday as Aimee Mackin picked up a ladies gaelic All Star after younger sibling Blaithin had booked a place in the AFLW Grand Final.

Technically, the 25-year-old only drew level with O’Hanlon’s haul as the LGFA are refusing to recognise those included in the 2020 Senior Championship Team of the Year as All Stars, though to all intents and purposes they were the same thing.

Many hours earlier, before the dawn had broken back home on the emerald isle, Blaithin Mackin had helped her Melbourne Demons team defeat derby rivals North Melbourne Kangaroos 33-16 in the AFLW semi-final Down Under.

The Demons side which also included Dublin legend Sinead Goldrick prevailed against a Kangaroos outfit featuring Vikki Wall from All Ireland champions Meath, though Cork’s Erika O’Shea missed the match with an eye injury.

It was a long day for the Mackin family, though they wouldn’t have been waiting in suspense as Aimee always appeared nailed on for another All Star to go with those already received in 2015, 2017 and 2020, when she also won the All Ireland Player of the Year award.

Although Ulster champions Armagh had four players shortlisted for these All Stars, their All Ireland exit at the quarter-final stage made it unlikely the Orchard county would end up with more than one recipient and so it proved.

So Crossmaglen’s Lauren McConville went home empty-handed for the second consecutive season and there was no joy either for first-time nominees, Aoife McCoy from Dromintee and Carrickcruppen goalkeeper Anna Carr.

All Ireland champions Meath predictably led the way with six All Stars, though their contingent didn’t include last season’s All Ireland Player of the Year Wall, Niamh O’Sullivan who was Player of the Match in the Croke Park showpiece, or either midfielder.

There were five for runners-up Kerry, who had ended Orchard hopes of glory, with veteran forward Louise Ni Mhuircheartaigh and midfielder Cait Lynch joined by first-timers Kayleigh Cronin at full back, fellow defender Aishling O’Connell and wing forward Niamh Carmody.

Surprise semi-finalists Mayo were rewarded with two All Stars in the shape of Danielle Caldwell at left corner back and Shauna Howley left half forward in a year when hitherto dominant duo Dublin and Cork have no representatives in the ceremonial line-up.

The other team to reach Croke Park in this season’s Senior Championship got just a single All Star but Donegal’s captain Niamh McLaughlin was crowned Player of the Year, the only woman except O’Hanlon and Mackin to have won that award without an All Ireland medal.

Of the four provincial champions, none of whom made it to the All Ireland last four, Armagh was the only county to pick up an All Star as Galway, who were beaten by Meath in the quarter-finals, also drew a blank.

Laois forward Mo Nerney was named Intermediate Player of the Year and the Junior award went to Blaithin Bogue of Fermanagh, managed by Armagh’s James Daly and Caoimhe Morgan, who lost out to Antrim after a replay.

In this Sunday’s AFLW Grand Final, Blaithin Mackin and Goldrick’s Melbourne Demons will face 2021 champions Brisbane Lions, for whom Tipperary dual player Orla O’Dwyer, the only Irishwoman to have won the Aussie equivalent of an All Star, is an influential figure. 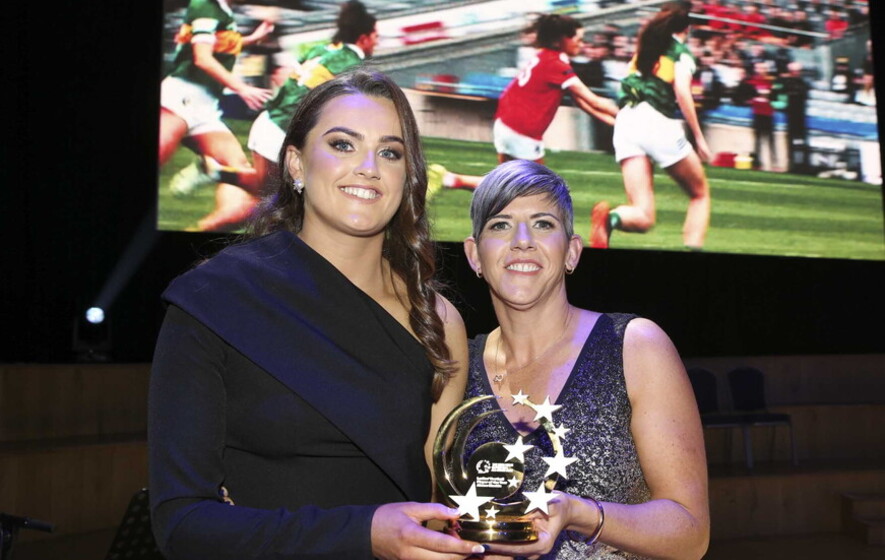